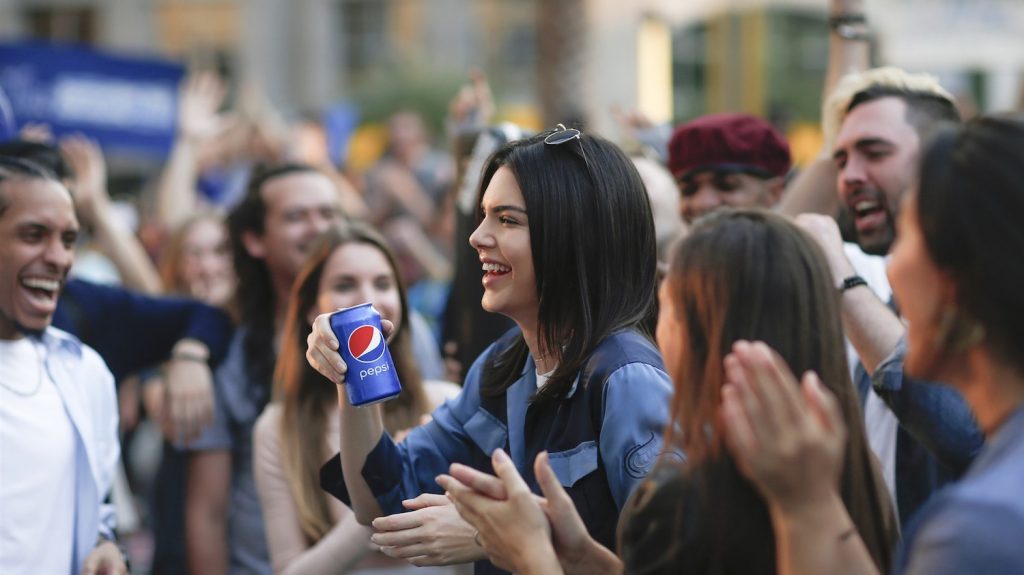 Every marketer is capable of making this same cringe-inducing mistake.

Picture this:
A group of young protestors are moments away from a standoff with police. Their self-appointed leader is a world-famous fashion model so inspired by their “Join the Conversation” picket signs, she abandons a high-profile photo shoot so she too can take a stand… for something.

She bravely crosses the divide and hands the most handsome police officer a cold beverage. The attractive 30-something pauses… The attractive protestors look on with bated breath… Until! The man glugs down the sugary drink! Everyone cheers! The music swells! Cue the tagline.

I’m sure for many of you, I could just as easily have said “Pepsi Commercial” and you could have recalled the same images as fast as Google did — the ad starring Kendall Jenner continues to be the #1 search result online. That’s pretty impressive for a commercial that aired for less than 24 hours.

Pepsi’s 2017 “Live for Now” ad had an interesting effect. Audiences did exactly what the protestors’ picket signs suggested: They “joined the conversation.”

Criticism was so swift and severe Pepsi removed the ad and Kendell Jenner even offered a tearful apology. But that didn’t stop the conversation. How could it when everyone had such a visceral response? People with taste found it unintentionally funny. People with knowledge of the Black Lives Matter movement found it outright offensive. And then there were some who felt something else entirely: vindication.

In 2017, I read articles with quotes like: “I knew it had to be an in-house job.” “That would never make it past the first brainstorm in an agency.” Being a young ad man at the time, I nodded so hard my neck hurt. “Yeah,” I thought. “No self-respecting marketer would be so out of touch.”

But my view of the Pepsi ad has changed drastically since then.

Yes, it’s offensive and tone deaf. But now I see how anyone can fall victim to the same mode of thinking that led to that commercial. I’ve worked with dozens of organizations since the Pepsi ad aired, and I’ve seen the same pattern emerge time and time again across industries, regardless of whether marketing was done in-house or through agencies.

What makes the Pepsi commercial so bad is that every image, every action, every word, simultaneously says, “We know young people,” while proving the opposite. The break dancers. The beanie-wearing cello player. The protest without a purpose. Even the tagline, “Live for Now.” Every detail is reaching out, trying to give a fist bump to a generation that sees it as a middle finger. It’s sugar water pretending to be a tonic for society’s ills. It’s as if they didn’t consult their audience at all…

This is why I feel empathy for the in-house team at Pepsi. It’s so easy to drink your own sugar water.

When we try to be profound before being authentic…

When we choose our own assumptions over research…

But most importantly, when we forget who ultimately approves our work, we start drinking our own Pepsi.

All marketers have to fight to develop great creative based on real insights. That is not easy. Then we have an even tougher battle ahead: getting it approved by people who live and breathe the brand every day but perhaps have very little first-hand knowledge of the customer.

Yes, the Pepsi ad was developed internally. But to use it as a criticism of internal marketing teams was — and is — a cop out. Every in-house team and every agency is capable of making the same mistake Pepsi did in 2017.

Working with an agency or video partner can be a good safety measure since you’re inviting a less-biased perspective into the room. But that’s not always the case. Your partner needs to look outside their four walls as well. They also need to cross a very real divide that often exists — the divide between ideas that are likely to get approved and ideas that will actually do something for the audience.

Until we all treat customers as the most important approver, we risk alienating the people who ultimately decide whether we’re successful.

In Pepsi’s case, they could have empowered a diverse staff to make creative decisions. And they could have conducted research involving real young people, so they could look for real insights to inspire their work.

Yes, there are differences between most marketers and the team who developed the worst commercial of all time. I imagine you don’t often work with a massive ad spend or with one of the world’s most popular brands.

Most brands producing bad ads tend to get away with it.

Maybe because the customer doesn’t pay enough attention to even notice. Or maybe they don’t care enough to offer their honest opinion. It’s easy to avoid controversy when you’re not taking any risks or say anything interesting.

Sometimes insights lead to creative risks. And the more risk-averse you are, the more uncomfortable they’ll feel. But if you need evidence that a brand can turn controversy into success just compare Pepsi’s “Live for Now” to Nike’s campaign, which came a year prior.

I don’t foresee any picket signs in Pepsi’s future. Their 2019 Super Bowl commercial was a clear sign the brand is in creative retreat, using the same concept they’ve used in the past, swapping out Cindy Crawford and Britney Spears for Cardi B — albeit with a simple audience insight baked in.

So I challenge you to consider your own work. Where are you drinking the Pepsi, and where can you dig deeper to get to know your audience better? Before you ask your customer to “Join the conversation,” I encourage you to have a genuine conversation with them first.